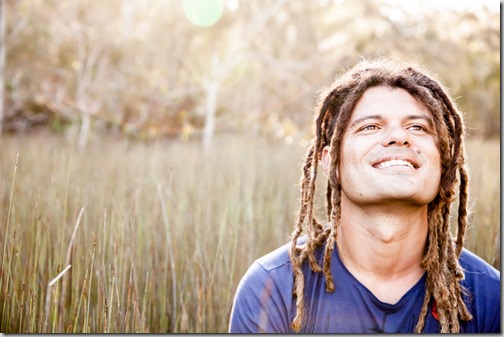 As myself and Jarred pull over to the shoulder of Auckland’s motorway, we are primed after listening to Ash Grunwald’s eclectic Blues tunes to interview the man himself. “I hope it was a pleasant experience” He jokes down the phone line

The Australian Blues musician sits somewhere between eccentric rocker Hani El Khatib the electric mayhem of Ben Harper while sharing a passion for surfing like close friend, musician Xavier Rudd; albeit without the strong eco leanings, he’s certainly not shy of a political cause. “I’m in the most Sharkie bloody area in the world at the moment” he says. “In the Byron Bay area, it’s a big issue. It’s absolutely beautiful but shark, shark, shark at the moment”

Grunwald’s colourful ethnicity is a varied musical tapestry that has him joking about his ‘blackground’. With a slightly disguised Dutch sounding surname it’s hard to pick his roots. “Coloured South African” he says. “That’s my dad’s side and Aussie on the other side. I even have the local mob saying ‘Have you got black brother?’ “Yeah, I’m boring I’m boring”

Make no qualms about it, Grunwald is all about the Blues. He has released eight albums and in 2005 received an ARIA Award, our equivalent of the Tui’s. Grunwald drew attention as a solo artist with the release of 2002’s Introducing Ash Grunwald, a collection of originals and blues standards that included a mix of traditional & modern songs “Smokestack Lightnin’” (Howlin’ Wolf) “The Sky Is Crying” (Elmore James) and “Rolling And Tumbling” (Robert Johnson) recorded live with only acoustic guitar and foot percussion consisting of a stomp box and tambourine. With such a strong musical pedigree, it’s no surprise he was destined to sing the Blues

“You know what? It might have a slight heritage vibe” he concludes. “My grandad use to teach me guitar as well and I grew up in a very Anglo kind of area and I just identified with black music in particular. I love that jive Black American culture and I just really got into Blues music for whatever reasons and I just love its soulfulness”

“Across my career I’ve always tried to do different things with that which is essentially changing the backing, changing the way that it’s made, but I always try to keep it as soulful as I can”

Talk turns to surfing, well the best spots in Auckland courtesy of local yokel Jarred. We think Ash meant Piha Beach on Auckland’s West Coast but we can’t sure, all we can think of is ‘that beach that Eddie Vedder nearly drowned in’. “Well I’d love to be surfing every day if possible” he tells us. “That’s something I love to do, that’s another massive passion I have. I like everything on a board I like to go snowboarding as well which I haven’t done in New Zealand yet, I wish I had”

“I think I’m playing Auckland Wellington I think and Raglan has been added” he continues. “I can’t really indulge too much because I’ve got this really great opportunity to make an album and I’m just launching my album. This guy in America is flying me out to make this album, I couldn’t say no and its kind of stressing me out a bit but I’m stoked. And he’s going to get special guests on it, fairy tale business for me. I’ve never really had anyone do that before”

Grunwald’s latest album NOW, sports a photo of Grunwald without his trademark dreadlocks, which he has worn for the past 20 years. The album was released in September but the process around making the album and song writing still remains the same