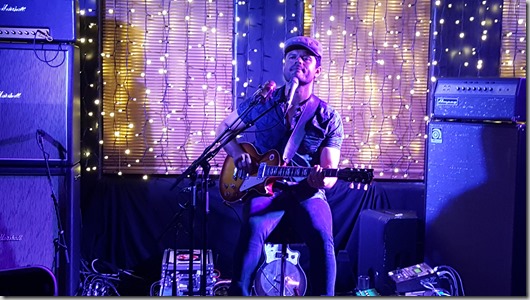 Armed with an arsenal of effects pedals and a couple of guitars, Australia’s Ash Grunwald is a spectacle to behold. His rich dulcet tones lending itself to a voice born to sing the Blues, while tapping savagely away on the foot stomp and playing the guitar with the fervour of a wild man

The Australian musician thanked the small but intimate crowd before egging the audience for any requests, as the call for Jimmy Hendrix’s Catfish went out Grunwald without skipping a beat launched into the classic Hendrix tune. That wasn’t the only Jimmy song to appear on the night as Foxy Lady had punters in the Backbeat vying for their air guitars

Earlier support duo Meghan Glue (Violin) and Kriston Batistich (Guitar) joined Grunwald on stage as they backed up to add to the festive vibe. Both amazing musicians in their own right, it was nice to have the violin and additional voices; he voice reminds me of soulful Doug Pinnick from Kings X with the punk sensibility of Hanni El Khatib. A powerhouse by himself he romped into a set that saw him sing well until midnight

During the course of the night he conversed and bantered with the crowd, his mischievous mannerisms keeping the night pumping along ‘If you’re thinking about dancing this would be the one to do it to’. The frenetic Skywriter ‘this one’s about taking a jet writer and writing love notes in the sky’, his 2012 hit Troubles Door (originally recorded with Aussie singers Vika & Linda) and a rarked up electric dobro version of Gnarls Barkley’s Crazy had the audience beaming as he turned to Meghan & Kriston smirking ‘You guys ripped the shit out of that one’

Grunwald is all about the Blues – his music, creativity and ethos collide together when he hits the guitar, coupled with his infectious personality you can’t wrong, singing the Blues or not. If you are going to see him play tonight at Raglan get in early and be prepared for a late night of sing-songs, it will probably be the best night out you’ve had in ages