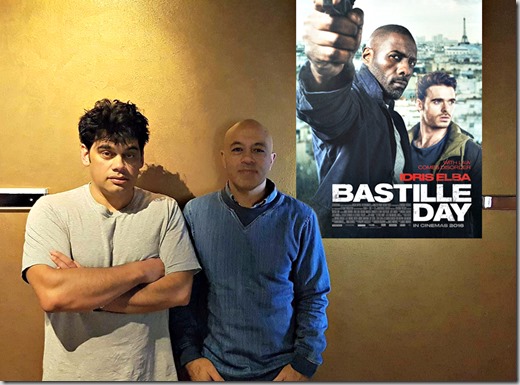 Director James Watkins foray into the action arena has paid off, his previous efforts Woman in Black and Eden Lake have drawn comparable critique in the horror genre and now tries flirting with this European action thriller starring TV’s London cop Luther’s Idris Elba and Game of Thrones Richard Madden (Robb Stark) plus a stack of European acting wealth.

Madden successfully manages to break out of the GOT mould as American Michael Mason a low life pickpocket on the streets of Paris, unfortunately Elba isn’t as lucky. Here’s the dilemma: If he speaks in an English accent he’s labelled James Bond auditionee or Luther, if he goes the American route then he gets tarred with the same brush.

If you like your action thick as lard then this movie will tick the boxes, if your sensory testes go deeper then you may struggle. It’s not a bad movie by any means, it’s much more palpable to watch than Sean Penn’s pair up with director Pierre Morel on last year’s action film Gunman or Liam Neeson’s latest Taken.

Why they didn’t make a full length Luther movie defies logic but get past the (just) passable Yank accents and the lovely Kelly Reilly’s annoying role as CIA head Karen Dacre then enjoy the ride, it’s a masterpiece rollercoaster of action. Madden & Elba both play their part with great effect, it’s probably the saving grace for this film although I couldn’t help thinking those terrorist scenes in Paris are a bit too soon?