Big Country – “It sounds nothing like bagpipes” Bruce Watson 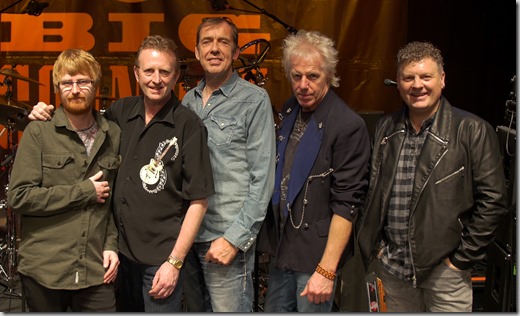 Mega 80s indie Scottish band Big Country are still considered to be one of the UK’s most popular groups from the era. Once described by Mick Jagger as “one of the best opening bands we’ve ever had” their Scottish roots were never questionable, the parochial patriotism evident in their songs Steel Town, Fields of Fire and the indelible Harvest Home.

After cancelling a tour here at the height of their career in ’86 the band is now on their way to Australasia to perform their trademark hits In a Big Country, Chance, Wonderland and more. Original guitarist Bruce Watson is on the phone in Scotland enjoying the rather clement northern summer as he talks to me, he still lives in the same town where the group started out from.

“We can’t wait.” He says down the phone in his thick as tripe Scottish accent. “We’ve been to Australia before to shoot a couple of videos for two singles we did in Brisbane and close to Perth. We’ve never been down there to perform live so were really excited”.

The current line-up coming to New Zealand is original guitarist Bruce Watson (guitar, mandolin, sitar, vocals), Jamie Watson (guitars), Simon Houghthe (vocals, guitar, harmonica) and original skin basher Mark Brzezicki on drums. “It’s great to come down to your neck of the woods” he tells. “It’s a place we’ve never been you know? And I don’t actually know why we never did it. We’ve seen most places in the western world and we were meant to tour there once but that didn’t happen.”

Most purists will balk at the departure of powerhouse bassist Tony Butler and the early loss of singer Stuart Adamson the ex-Skids guitarist who was found dead hanging inside a closet of his Hawaiian hotel room in 2001. Watson still remembers that day he recalls as “sad, really sad.”

“Stuart went away to America so I didn’t really get to see him much” he says. “Apart from a few calls here and there, some emails and I’d been out to see him a couple of times but you don’t know what’s going on in someone’s head especially when they’re thousands of miles away from you.” Watson is adamant the band is still undeniably Big Country.

“It’s kind of different but the same.” He says. “Tony, Stuart, Mark and myself toured for twenty years together and had a close bond. It’s kind of hard for any band unless you’re U2 who have a history of over thirty years will never have the original line up. I suppose The Rolling Stones, the Who don’t have the original line up but the show kind of has to go on. There’s a bit of sadness but there’s also a bit of happiness as well”.

Big Country’s first single was Harvest Home in 1982. It was a modest success, although it did not reach the official UK Singles Chart.Their next single was 1983’s Fields of Fire (400 Miles), which reached the UK’s Top Ten, while their slow burn hit Chance was as Watson recalls “wrote the music in a flat, which I can still see just over the wall.”

The Crossing album was a hit in the United States (reaching the Top 20 in the Billboard 200), powered by In a Big Country, their only US Top 40 hit single, the band also performed on both the Grammy Awards and Saturday Night Live. With so many memorable songs to choose from it’s a bit of a stretch to pick which songs to play live when they come here.

“It’s like choosing your favourite children.” He says. “Wonderland’s always been a favourite of mine, I still get a buzz from playing Fields of Fire, In a Big Country, I never get bored playing those songs, they all have little stories to tell, but I couldn’t tell you which one was my favourite.”

Big Country’s sound was driven by Butler’s pounding bass lines and Brzezicki‘s clever drumming (he also appeared on The Cult’s iconic Love album). The bands Celtic Indie leanings heavily reliant on Adamson and Watson playing and engineering their guitar sound to evoke the inspirational spirit of bagpipes, fiddles and other traditional folk instruments.

“Well I wasn’t after a bagpipe sound, it’s what the UK press picked up on.” Watson recounts. “What Stuart and I use to do when we were working out guitar parts we made a conscious effort not to do any blues bending otherwise we’d sound like Thin Lizzy, Status Quo or Wishbone Ash. We liked those bands anyway but made a conscious effort so all the guitar lines we played dead straight without any bends, that’s how it developed. The effects we used at that time on the guitars the echoes and the reverb made it sound distant. I mean it sounds nothing like bagpipes to be honest with you.”

The social media game has changed the way the band has kept in touch with fans over the years, while Watson is online every chance he gets, he still admits he’s “getting use to mobile phones” and confides his love/hate relationship with the PR side of things, something he’s starting to pick up on more.

“I’ve never been too interested in what someone’s had for breakfast” or “A photograph of my bowel movement” but it’s the game part of the deal as it were.” He says laughing.

It’s a trip of lifetime for the band and a concert that’s taken decades in the making for fans. They’ve already sold out the first night in Auckland, with a second show put on at the iconic Kings Arm’s Tavern, no mean feat considering the All Blacks are playing their first International test just a couple of miles up the road.

“We’re not going to get the time to see anything apart from hotel rooms and inside airports, which is a shame because I’d really like to get out there and explore and I’m hoping the gigs are in town centres so I can get a vibe of the place. It’s going to be absolutely nuts.”