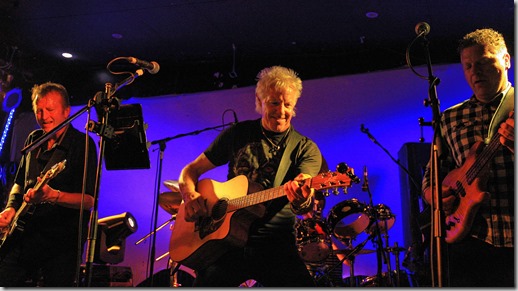 Having grown up as a teenager in the 1980’s, Big Country was one of my favourite bands. I had even worn out my cassette of “The Crossing” through overuse. So when I heard they were touring and coming to New Zealand I was quite excited.

However, I found it difficult to visualise Big Country without Stuart Adamson and Tony Butler. Two very big holes to fill in terms of Adamson as a front man for the band, guitarist and vocalist, and Tony Butler, also on vocals and killer bass. The replacements, Jamie Watson (Bruce Watson’s son) on guitar and vocals, Simon Hough on lead vocals and guitar and Scott Whitey on bass had their work cut out.

I had arrived early to the venue, The Kings Arms, at around 5:30pm when the band arrived for the sound check, most of which seemed to be focused on the drums. About an hour or so later things wrapped up. At around 8:45pm, Tablefox, a local Auckland based band, took to the stage to warm the crowd up for nearly 30 minutes. I had not heard of them before, but their style and sound were well suited to the occasion, venue and headline act.

Soon after a quick changeover, it was “Game Time” and Big Country hit the stage opening with “Porrohman” from their first studio album “The Crossing” and then a medley-like transition into “Harvest Home”. Big Country played a set of fifteen tracks. Fourteen in the main set and one encore. As a fan of their earlier work, it was pleasing to see that ten of the total fifteen tracks were from their first two albums, “The Crossing” and “Steeltown” which in my opinion is their best work. They chose “Inwards” for the encore. Personally I think it would have been more significant if they used “Harvest Home” as it was their first recorded single, or even “Wonderland” which is a huge fan favourite.

Within minutes it was apparent that this was still Big Country and they sounded much better than I was expecting. The replacements were very capable and the band was tight. Simon Hough’s voice was not Adamson, but was well suited and Scott Whitely with over 30 years experience as a professional bassist, having played with artists such as “The Animals”, “Eric Bell” and “The Boomtown Rats” re-produced the signature Tony Butler bass lines with ease.

Jamie Watson surprised me in that he was playing with maturity as if he were a founding member and seemed extremely comfortable on stage in the band. As the other electric guitarist, he filled Adamson’s parts well and at times, with eiriely similar vigour. Bruce Watson sounded good and looked the same while he belted out the trademark guitar sound that is now synonymous with the band.

Mark Brzezicki looks like he hasn’t aged, certainly his solid powerhouse percussion has not and this was especially evident on “Where the Rose is Sown”, “Wonderland” and when he took to the stage to initiate “Inwards” as the encore with Jamie Watson initially.

At one point I heard somebody yell out “Into the Valley!” Which is in reference to a band that Stuart Adamson previously played in called “Skids” for which “Into the Valley” was the lead track of their 1979 debut album “Scared to Dance” and a particularly catchy number.

Not surprisingly many of the audience had traveled some distance and for some people this was their second night. Having almost not travelled 400 miles myself to see them (Wellington to Auckland), I’m glad I did, because they were worth the effort for sure. Big Country now head to Australia to play five shows before heading back to the UK. They hinted they would be back some time in the future and although that might just be the right thing to say to an audience, I’m hopeful they will.