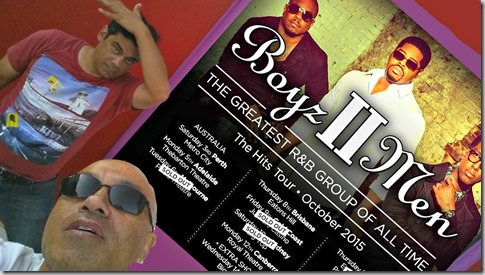 One of the most influential R& B groups to have entered the world of music, American vocal group Boyz II Men are touring New Zealand this weekend, playing Auckland (sold out) and Wellington. Previously the group with a string of hits from the 90s including the smash hit End Of The Road are looking forward to returning to our fair shores performing as a trio, and also according to original band member Wanyá Morris, the prospect of trying our Maori hangi again – this time with chicken

‘The one thing we didn’t do the last time we were there, because we were all fooling around and doing stuff is having a hangi’ He says. ‘But this time I want to do it with chicken because last time all they had was pork – I want to have some chicken , beef without any pork around it because I don’t eat pork – I want to eat hangi, see the people, do the haka, hang out with the people and enjoy the culture”

The 90s were the age of Hip Hop, how could anyone forget MC Hammer’s ‘can’t touch this’ (those pants whoar) or the New Jack Swing of Bell Biv De Voe’s ‘poison’ the unforgettable Wreckx-N-Effect with ‘rump shaker’?. These were the halcyon days spawning a genre that has become a worldwide phenomenon, begging the question ‘Why didn’t Boyz II Men ever dabble with hip-hop?’

“Because we can’t Rap” confesses Morris. “When you do other things better than other things you got to stick with what you’re good at, that’s why. Growing up in Philadelphia my mum and dad were always in singing groups and bands. I would go to their rehearsals, I always enjoyed vocals and hearing the sound of it and how it all comes together, the harmony aspect of it, it was something that was born and breed into me without even knowing”

Boyz II Men proceeded to break records with the subsequent releases of I’ll Make Love to You and One Sweet Day (with Mariah Carey), which, at fourteen and sixteen weeks respectively, each set new records for the total number of weeks at number one. As Morris recalls of that meeting “She was really laid back, it was at a time when our careers were on a major level “. As of today, One Sweet Day still holds the all-time record with sixteen weeks at the top of the Hot 100

“At the time, Boyz II Men we were doing really well” He remembers. “We thought that would be a great connection for Mariah Carey and Boyz II Men to do a song together. Tommy Mottola president of Sony records at the time and then Mariah Carey’s husband, thought it would be a great vibe, a good connection. He gave us a call while we were on tour, so we recorded the song right away. We wrote the song with Mariah and Walter (Afanasieff) finished writing it and went back on the road again. Maybe a month later, we came back, recorded it and never went back on the road and there she was with a hit [laughter]”

Apart from sampling our national cuisine ‘hangi’, Morris and the boys will be in the country for the All Blacks Rugby World Cup quarter final game against France, however this will be the furtherest thing on their mind. “For the most part I want to have a great show. The main thing is that when people come to that show, they leave fulfilled like they enjoyed everything that they’ve paid for. But not only that, but that they fall in love with Boyz II Men all over again”