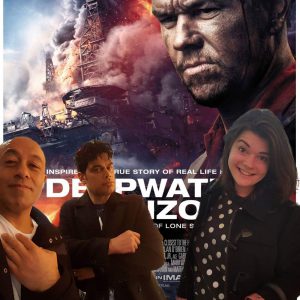 I can definitely tell you that this film exceeded my expectations. It’s a good quality story based on a true event that happened on April 20, 2010 when Deepwater Horizon, the offshore drilling rig exploded, making it one of the worst environmental disasters in world history.

Director Peter Berg, taps into our heart as the first scene with a documentary tape recording of a survivor’s recount in court, tells the story of that fateful disaster. My pulse started racing when I heard the recording realising it was actually real audio. My eyes and ears wide open for almost two hours, such was the impact of this film.

The movie reminded me of Cameron’s Titanic, exploring the deep waters a few years after the disaster happened. In fact, watching the film preview recalled those feelings I had as a youngster watching the Titanic. Both were true events, both emotional, both disasters that shocked the world, however, the subtext of ‘Deepwater Horizon’ is a lot more complex. It’s political, conspiratorial and controversial undertones played out on the big screen, I found I was hit with emotions from all angles.

Mark Wahlberg plays hero Mike Williams brilliantly, reflecting the pain of a real survivor. Peter Berg demonstrates the mechanics of the explosion after the failed negative pressure test with dramatic pace, while money and business, forces that drive the oil industry, seem to risk the lives of many.

Lots of evidence about the explosion of the drilling rig were hidden behind the scenes. The truth is yet to be revealed. You won’t waste two hours of your time if you decide to go and watch the film. Maybe you will even take away a good life lesson. Deepwater Horizon is a strong and emotional roller coaster of a film, it’s spot on.