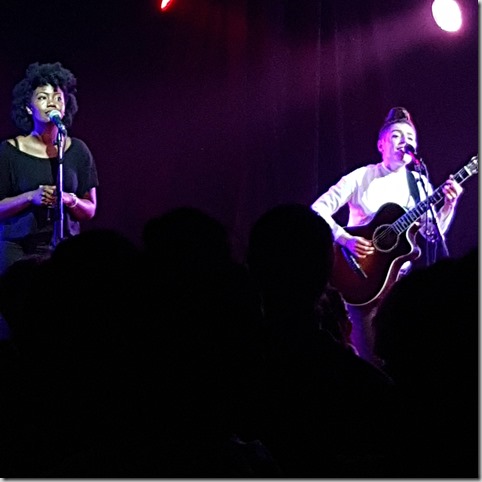 Emily King was resplendid in white collared shirt and dinner jacket, her vibe androgynous, reminded me of Janelle Monae with the maturity of India Arie to add to her dulcet tones. Her music was on show at the Auckland Arts Festival, aided by her backing singer Jaime Woods, herself an accomplished songstress they wooed the audience with King’s original songs, the Spiegel Tent the perfect setting for an intimate acoustic concert

Emily came on stage after a quick rapport and smile with the crowd proceeded with Good Friend, her grasp of playing the bass note on acoustic guitar was technical but in no way distracting from the lyrical melee. After asking everyone ‘if they were alright’ she turned to Woods who asked pointing to her speaker “Can I have less of Emily?” to which she retorted laughing “She’s the boss”

From there she took the audience on a musical rollercoaster, songs like Radio, Down and Animals got the crowd excited as they clapped and cheered every time the two vocalised, dancing around each other like two courting swallows. Her guitar playing sublime, technically brilliant without sacrificing her art, while wearing a voice that defies belief. At times when she harmonised with Woods it was like having an out of body experience

King’s banter was on song, remarking “This is the furthest anyone in my family has come” and later confiding “My family weren’t interested in me going to college but they were when I was going to New Zealand”, She also recounted the time “she got kicked off her record label” noting the ‘assholes’ were also the inspiration behind her song Off Center, while U & I another wonderful song that the Grammy nominated singer and songwriter wrote, added to her list of insightful stories

Local musician Tama Waipara came on stage greeted by raptous applause adding to the vibe as the trio swelled adding his rich vocals. You could tell there was a closeness between the pair, their friendship strongly featuring on the songs. King live in an intimate setting is special, a couple of the songs I found a little sterile due to their musical genre but overall her set was nothing short of amazing. She is the complete package, the vocal gymnastics woven between the three aurally orgasmic

Check her out live first and foremost, then track down her extensive catalogue. She is adamant she’ll be back, until then the memory lingers