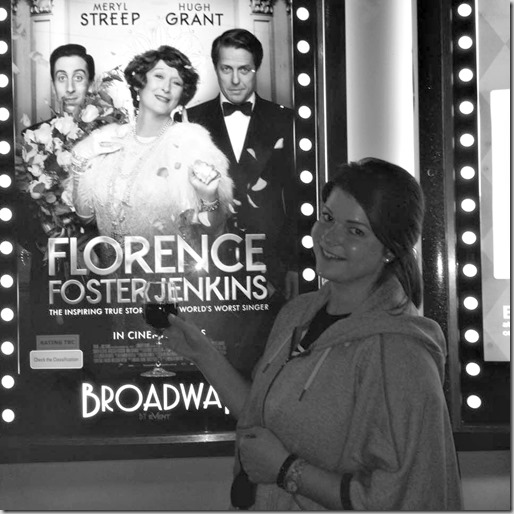 I never knew anybody can be so famous for being a terrible singer until I watched Stephen Frears’s film Florence Foster Jenkins. For the past few years there has been a wave of young pop singers clearly lacking talent yet getting millions of fans. I won’t waste time writing about them, it’s all about Florence.

I love Meryl Streep, as a gifted actress she delivered a very good performance of the most ungifted opera singer of the 20th century. I’d call it a very well-played parody, as it must be extremely hard for a professional and elegant actress like Meryl Streep to play a rich woman who had absolute no taste and understanding in fashion, what’s even worse she could never sing. The only bright side of it all was that she appreciated the music and her husband (gracefully) played by Hugh Grant fully supported her.

I’ll be honest to say that previous characters Meryl Streep has introduced us to, were played a lot better on a mature level. Few examples where I loved her acting was in the Abba singing film Mamma Mia, that suited her so well, and I can never forget that chic Devil in Prada, she was brilliant.

Now we see a respectful parody of Florence. Why respectful? Because she did something useful for music which she loved so much. Lucky for us, New York took it for what it was, even kind enough to offer her a final debut in Carnegie Hall.

“People may say “I can’t sing”, but no one can ever say “I didn’t sing.” Yes indeed, I agree with you Florence. Her famous quote is still remembered by many.

If you are looking for some fun, and you have no idea what to do with yourself, I’d suggest you may like to watch this film. One advice for the ‘not-so-tolerant’ audience, take ear plugs, because Florence might drive you a little mad!