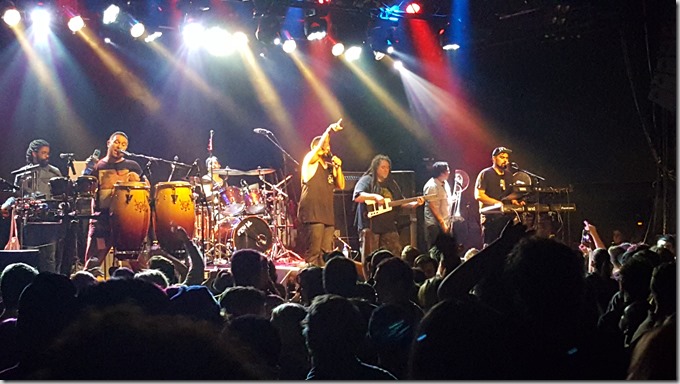 It was a night like no other, bloody cold, the PowerStation crowd was already at capacity filled to the brim as Katchafire primed up the crowd with their Jamaican infused Reggae, the local Polynesian flavour a big hit especially given that its festive ambience is more suited to summer than the present wintery conditions

Lucky to have caught Get Away & Giddy Up as the skanking went up a notch, shit someone must’ve been lax about enforcing the smoking laws as pockets of smoke went up around the room, there was a bit of passing on the left hand side if you know what I mean. Katchafire receiving no less than a shouting ovation – job well done

Kora who wooed crowds at last March’s Homegrown in Wellington looked and sounded anything but rusty, their energetic live shows are trademark as Fran & the boys kick-started the teeming crowd into life. Classic Kora fare On My Mind, Burning & the plodding rhythm of the heavy-as-stink Skankenstein from their excellent debut album were added to the playlist as the boys who originally from Whakatane cooed the crowd with their dub infused rock beats that had everyone moving top & bottom, these guys had the audience in their hand

After Brad & Laughton Kora left the band in 2013 this has had little impact or no effect on the groups sound. Fran Kora has an incredible vocal range, rarely seen in today’s crop of local artists, whether the soul infused Story Ain’t Over, the rappers delight of Dream Life or the dirty funk of Love In The Shadows, the crowd were here to get down, especially rousing up a storm singing along to Drop Dead Killer, its infectious chorus ringing out across the hall as Fran stood centre of stage on the speaker wedge arms stretched out wide beckoning the dancing hordes

It’s impossible to pigeon hole this band musically and that’s an asset. Their set rarely let up only when Fran took the mic in hand to quickly chat to the audience or to confront the rogue audience member who made his way on stage to wager his 5 minutes of fame, the second stage crasher had no such luck. Ok so no Politician or Flow however the team up with KP from Sunshine Sound System on Pop Your Bubble was worth the hassle fighting Auckland traffic to be there

Make no mistake Kora are a force to reckon with, they’ve flirted with fame overseas in Europe and had remixes done to their songs but why they aren’t as big as they should be, still remains a mystery – As long as the mojo’s flowing they are unstoppable