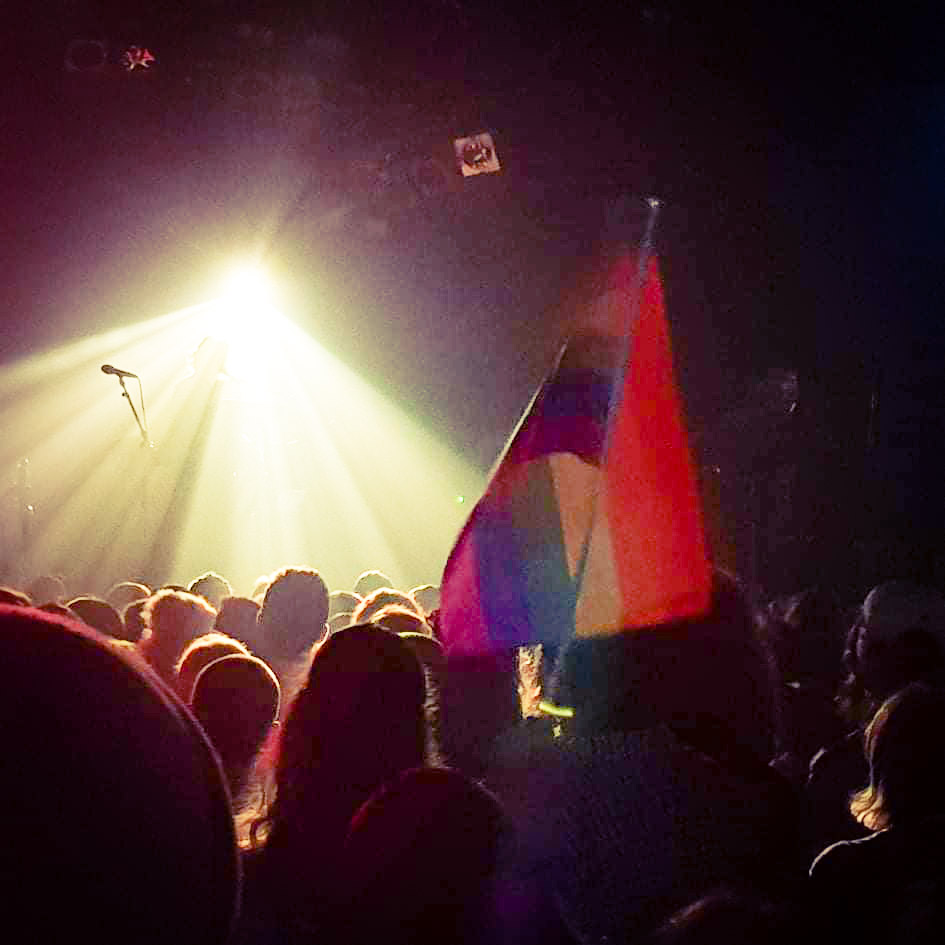 Mikaela Straus aka King Princess is the hottest ticket in the music-world right now. The native New Yorker’s raw narrative love stories the impetus behind her Indie- Pop music. She’s also the poster pinup for the LGBTQ community, which is equally commendable, but her music is insanely good.

Straus’s rip-snorting lyrics are blunt, but honest. Her music a toast to the melodic and fashioned to a tee. With such a mature insight regarding ‘relationships’ and an arsenal of hits, it’s hard to believe she is barely nineteen.

Starting with the Laurie Anderson-esque Make My Bed, she shifted up gears on Upper West Side, probably one of my fave tracks of the year. The guitar driven song with its catchy hooks played live with her ‘fresh-faced’ band, really took the song to another level. “Another bitch from the Upper West Side” ringing out across The Powerstation as the band kept the energy levels while she swayed occasionally giving the ‘horns ‘up or preaching her political leanings with a “Fuck Donald Trump”.

Her relaxed gait onstage sometimes a little vexing, her candour defiant as she hurled herself into the short but satisfying set including the excellent bangers, 1950 and Talia. Again live these sounded incredible, with much fanfare and gusto that only King Princess could deliver – bloody impressive. Rattling off the songs in quick succession, Sunburn, Best Friend & House Burn Down were faultlessly delivered as she teased the crowd, who were only keen to “Rock out”.

After hearing her e.p. 1950 this year, I was hooked by her song writing, a delicious Indie Edge mixed with Pop sensibility that was definitely better than your average. 1950 is a tribute to the 1952 novel The Price of Salt by Patricia Highsmith, to the LGBTQ Community and to queer love. The song reached a wide audience when British singer Harry Styles tweeted a lyric from the song. Straus followed this with her second single Talia, and pretty much hasn’t looked back.

As the band left the stage, shouts of “Pussy Is God” were magnified but alas to no avail, as she completely ditched her latest tune to go all out on a Rock crescendo. Also omitted was Holy, which I was surprised but then again, she was in control and dictated the mood from the stage. It was probably one of the best gigs I’ve seen this year, it certainly lived up to her recordings and hype the Music World has bestowed upon her. I don’t really think she gives a shit, seems she’s just happy to be making music and going along for the ride. Not a bad maxim for life I suppose.