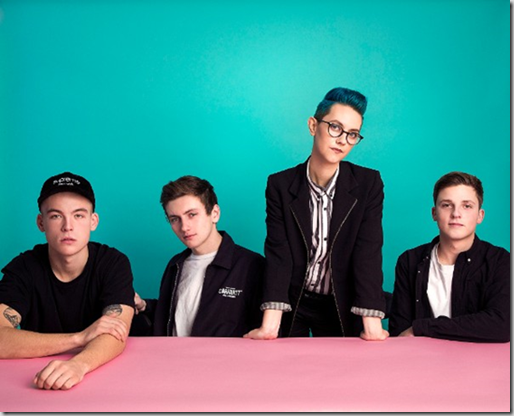 The stage is set for the return of Ladyhawke.
The super-talented Kiwi singer-songwriter is back in New Zealand to play two gigs as part of her WILD THINGS tour, which has been wowing audiences around the world.
Ladyhawke, whose real name is Pip Brown, and her band will perform at Wellington’s Bodega on Friday, July 22 with support from DJ Martyn Pepperell. Pepperell is a well-known and loved Wellington DJ and music identity.
Ladyhawke performs at the Powerstation in Auckland on Saturday, July 23, with Openside as support.
The Auckland-based Openside have had a massive year, picking up a bunch of attention for their catchy single ‘Branches’, as well as winning over a ton of new fans opening for Twenty One Pilots in Auckland and playing at the inaugural Auckland City Limits Festival. The band have caused a stir online with their incredible covers of Taylor Swift’s ‘Style’ and Major Lazer’s ‘Lean On’.

Ladyhawke‘s two New Zealand shows follow sold-out gigs in the UK, the States and Australia’s East Coast. And in keeping with her reputation as one of music’s most enignamtic performers, the Masterton-born singer has drawn rave reviews.
“She gets up on stage with a huge boost from the audience, with big Dr Martens boots, skinny black jeans and a shimmery bomber jacket, loaded with attitude… ready to give the crowd what they came for, a piece of her undeniable talent.” Louder Than War: The Gorilla in Manchester, June 2016.
The WILD THINGS world tour follows the recent release of her critically acclaimed third album of the same name, which contains the catchy singles ‘A Love Song’ and ‘The River’.
“Wild Things is an excellent step into upbeat, positive songwriting for Brown… the album holds together very well, exuding optimism and warmth. Between the catchy hooks, throbbing synths, and very real emotions, Wild Things is Brown’s best album yet” – Renowned For Sound
“Wild Things is a celebration for Brown, a celebration of love, good times, newfound clarity, and getting her groove back” – New Zealand Herald
With a busy schedule locked down for the rest of 2016, this could be New Zealanders’ last chance to see Ladyhawke live on home soil this year, so tickets to both shows are selling fast.