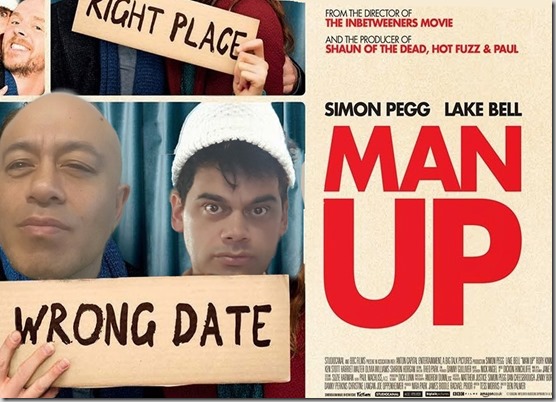 Love stories are a dime a dozen, it’s a real craft getting actors who play opposite each other to muster up believable onscreen chemistry sometimes with dire results. Thank goodness Man Up doesn’t suffer the same demise

The Inbetweener’s director Ben Palmer is at the reins of this feel good Brit Rom-com, it’s a sassy take at the modern ideal that “there’s someone for everyone”. American Lake Bell plays 36 year old cynic Nancy who struggles to find any worthy dates but that all changes when she stumbles upon Jack (Simon Pegg) after holding a book at a train station that someone had left behind and he mistakes her as his blind date, the rest they say is history

Man Up isn’t perfect, it starts off a little sluggish, while establishing the storyline their relationship a little contrived if not congenial. It’s not until the scene where Jack and Nancy meet Jack’s ex-wife and her new beau in a bar that we finally get some great interaction between Pegg & Bell relating their sexual prowess in the bedroom (comedic gold) and the introduction of Sean (Rory Kinnear) the childhood sexual deviant friend of Nancy who thinks they went out together in school, some of his behaviour bordering on cringe, for me, yielded the biggest laughs of the film, seriously he could have his own spin-off TV series he’s that funny

Pegg almost inconceivable as the romantic lead is reliably witty while Bell pulls off an ok English accent. She does a solid job of keeping up her character in the film and is likeable throughout. Some nice touches included The Pixies classic Where Is My Mind played on the piano as Nancy leaves Jack after he founds out she’s not who she says she is, and the cornucopious amount of 80s music in the film including the hilarious dance in the bar scene between Pegg and Bell to Duran Duran

Unlike The Inbetweeners I really enjoyed Man Up. It’s a little Run Fat Boy Run, it has the cheesy fairy tale ending, but it doesn’t take itself seriously and is peppered with a good dose of 80s music – all the elements for an entertaining watch