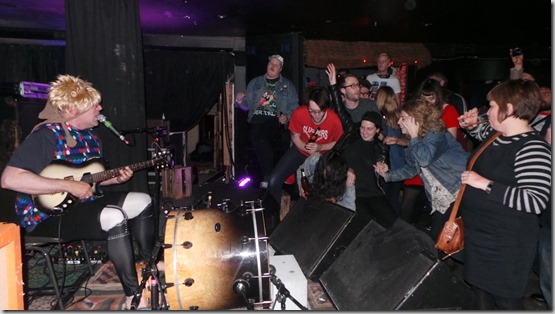 Mark Sultan aka BBQ is an enigma wrapped in a shroud of mystery. The self-professed Canadian Punk rocker who’s played in Canadian garage bands such as Spaceshits and Mind Controls has been busy playing solo shows around our fair country, however he made no qualms about his state of mind being here as he fired at the audience “It’s my last night and I can’t fuckin’ wait to leave this country”

Maybe it was the stress of touring or it was Sultan the master show-man hamming things up whatever, sporting a wig and unassuming in colourful stage garb, Sultan is a demon behind the drum kit playing quick-fire guitar riffs and singing his hit songs that have seen him become somewhat of an anti-hero in music folk lore

Waddlin’ Around and I’ll Be Loving You are classic KK/BBQ tunes however calls from the crowd to‘play some Ding Dongs’ fell on deaf ears as Sultan kept the audience at bay even throwing his beer at one guy in the front while off-loading a tirade of expletive deletives, the crowd didn’t care it just incited them more

In 2007 he released his first album as Mark Sultan entitled Sultanic Verses. In 2010, Sultan released $ as Mark Sultan and The Ding Dongs, his back catalogue of songs are many so it was a shame the set felt short time wise. He bated and amazed the animated crowd with dexterous drum licks and manic playing skills, Sultan happily ‘baring his soul’ and playing his ‘pure’ rock & roll meshed into what seemed like one big mash up of King Khan & BBQ Show tunes, plus some older solo stuff thrown into the mix

Definitely a memorable night, as they say ‘if they’re not talking about you then give up’. Agitated as he was brilliant Sultan says you can ‘take him or leave him’ he’s true to his word, a raving genius who doesn’t give a fuck. Probably just as well