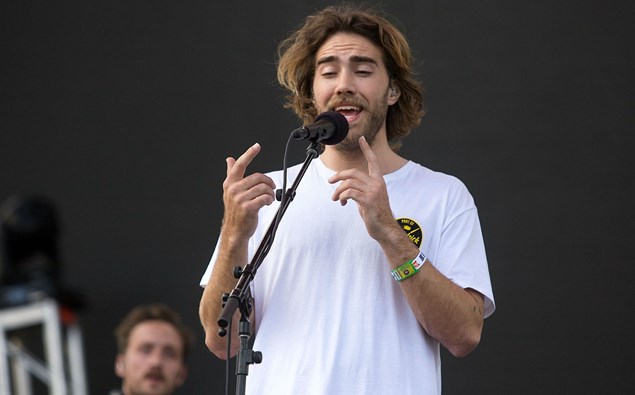 Whether tinkering the keys on new album Rainbow Valley tunes, Light My Dart Up, playing the drums on Better or traipsing the stage in bare feet with flute in tow at Auckland’s historic Civic theatre, Australian multi-instrumentalist Matt Corby was pure, unadulterated, sonic bliss.

There was nothing to suggest it was problematic for the Queensland native, as he wooed the packed crowd with his brand of lucid, funked-infused acoustic Soul; the trill of his smooth voice mesmerising as it was pleasant to the ear.

Corby’s songs have spanned a vast career. Achieving commercial breakthrough with his EP, Into the Flame in 2011, going on to achieve 6 × Platinum. His Aria Award winning singles Brother & Resolution were given consideration and treatment, sounding as punchy as their recorded siblings. Keeping his band at bay, they waited on cue, Corby frequently sat marinating on songs, eyes closed, in the zone oblivious to his surroundings.

Scanning the audience and perusing the room, I was cognizant of the fact that I was clearly the wrong demograph. Being a Maori man, clocking up a ‘half century’ and not a teenage Pakeha girl screaming “Take your shirt off” didn’t at all make me feel marginalised or deter me enjoying the concert. In fact quite the opposite.

The guy has grown up, recently had a kid and now lives on a bucolic rural setting in Queensland, while it seems, most of his audience are getting younger and youthful; such is his artistic pull and dare I say – sex appeal. As Corby coyly remarked on Miracle Love, he should’ve got us “up to dance sooner” – opportunity missed, but a nice way to end a fabulous night, as he closed out the set to rapturous applause.

Corby has a penchant for building intensity on riffs, songs like the lull of All Fired Up have an impromptu jam vibe to them, percolating to perfection as the band come together to add spice in the mix. The barbed Blues riffing of Souls A’Fire from his 2011 Into The Flame EP, sounding heavy-as-stink in a live setting, or the unusually cool song choice of Roy Ayers’ classic Everybody Loves The Sunshine, satisfying the most ardent Corby fan.

Also to note, was the fantastic talent of MANE supporting Corby. The Adelaide artist aka Paige Renee Court was outstanding. Her brand of self proclaimed dark Pop piqued my interest, adding up to a satisfying night of Aussie music. (yep, sorry but can’t bags these guys) Her latest singles Chasing Butterflies and Save Yourself had a maturity belying her youthful gaze. Her unique low dulcet tone a perfect complement to her Indie fueled music style, reminding me at times, of our own Lorde (no, they can’t bags her either).

If you want to catch two of Australia’s most exciting musical live acts, then this is the perfect opportunity to do so. Even if you haven’t heard their music, there is enough ‘first time’ appeal listening to the songs to ensure a bloody good night out. Tonight April 20th, they play Wellington’s Michael Fowler, then Christchurch’s, Isaac Theatre Royal the following night April 21st. Recommended.