Me Before You – Movie Review – Jarred Tito 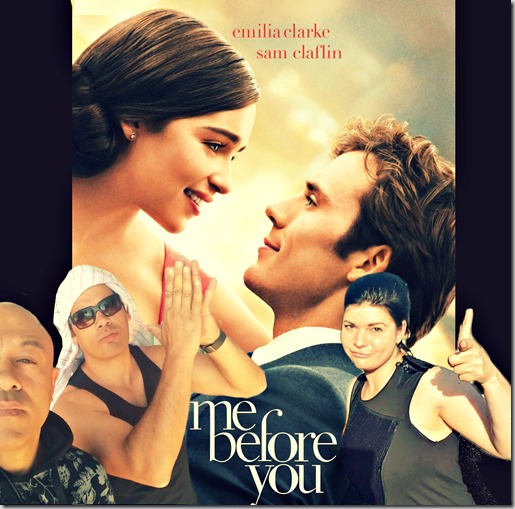 It all read like, ‘a Lois Lane meets Superman’ type of story when I read the premise. That’s to say, an impossible matchup between a ‘High Brow’ top society type gentleman and the working class ‘no frills’ girl next door. There’s no cape and red boots and Lois is ‘Lou’ the girl next door but it still had that feel of two people from different worlds get thrown together as you would in a Reality Game show. Yes there is a very successful book behind this film, like so many other recent soft romantic dramas of late. And yes there is a point of difference like the others too. But this time it’s not a werewolf nor is it a vampire or even ‘death game.’ Nor does it involve a torture chamber as we saw in ‘Fifty Shades of Embarrassing’. It’s not even a ‘wheel chair.

At first glance this plot is a lot simpler in comparison. Yes Will Traynor (Sam Claflin) is in a wheel chair but this is not really the elephant in the room. We could easily live with our main guy falling in love from a wheel chair. And let’s be honest, Lou Clark (Emilia Clarke from Game of Thrones) wouldn’t be too hard to fall for anyway. But when she’s playing this larger than life nurse come friend sent to cheer you up, well the rest should be easy.

The story doesn’t hinge itself on class and culture either. No, the real ‘elephant in the room’, the thing that makes everyone in the theatre unsure of whether to applaud, cry or fold their arms in protest is a subject a lot more sensitive than any of the usually fodder burned up in rom-coms of the past. It is the very sensitive subject of ‘euthanasia’. Oh my days!! A serious drama disguised as a Rom-Com. Okay I was a little taken back by the subject matter when it was first introduced as a theme. I don’t know if the filmmakers handled this as subtly as they could have but there it was and you could get away from it. A death seemed eminent.

​So how was the experience for me? Well if I’m honest I found myself enjoying the film at about quarter of the way in. At the beginning there were a few small laughs here and there but noting to split your sides. There was even a little tension at points but once again nothing that really qualified as real drama. In fact I would be hard pressed to say that this picture was a comedy or a drama. It seemed to just unfold as an impossible romance with tragedy looming as a close friend.

But somehow it still managed to be entertaining and even endearing. I can only say that it must have been the chemistry between Emilia Clarke and Sam Clafin that carried this picture.

They really did have something that Hollywood used to celebrate in the golden years of film making. It was such a breath of fresh air to see Clarke in a role away from dragons and armies and in a role that seemed to be more natural to her. She really is quite delightful in this picture.

​At the half way point I think that I had warmed to the characters. I even felt the force of each of the protagonist’s plights and woes. I should say that the only antagonist in the movie is a dangerous motorcyclists of which we thankfully never see.

​Overall I enjoyed the movie. It is not a deep film with great insights but it is a nice watch. I’m not sure that I would recommend it to those that are sensitive to controversial themes as I myself felt a little awkward leaving the theatre. However, a good watch and a little food for thought.

Definitely a ‘tearjerker’ so be prepared. But don’t be disappointed if you don’t cry. They let you down gently.