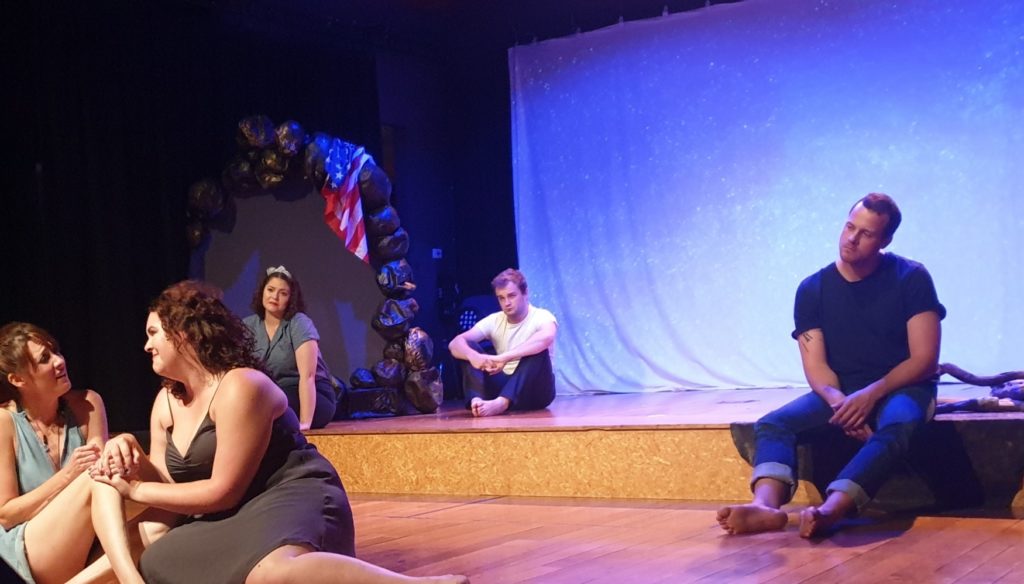 “Orphans and Bastards don’t have that kind of birthright” he replied.
Auckland creative team Navi Collaborative are back with their third original play. The feature show is a first for Navi Collaborative at this years Auckland Fringe Festival. (On) Whatipu is a veritable triumph of language, music, puppetry and dance, in what could best be described as a “Ghost Story” with a strong immigration message – A sense of ‘being’ & ‘belonging’ are explored, all colliding upon the windswept shores of West Auckland’s Whatipu Beach.

The main protagonist Nina Johnson played by Dawn Glover, an American (herself a Texan) in Aotearoa, is caught up in the afterlife while questioning her meagre existence post-mortem. Her dead ancestors from the land of her birth are washed ashore, the encounters are sometimes heated or jovial, help Nina face past griefs while discovering her song, and also the hope of finishing the album that is long overdue.
(On) Whatipu is a theatrical journey that is engaging to watch with different elements of performance. For example the ‘choir’ live music or puppetry heightening the viewer enjoyment, all this as she “digs her toes into the black sand of the long white cloud.” The ‘Americanism’ is not as overt as one would think. Considering all the local actors have adopted the foreign lilt in some shape or form, the issue of ‘belonging” is parochially played through the eyes of a migrant, which is interesting given that immigration is used as a political voting card, and, a hot potato in this country.

I enjoyed the eco-immigration ethos wrapped around its multimedia framework. Glover’s talent has a raw beauty, I enjoyed her portrayal as Nina and is a dab hand at singing. The cast also do a stellar job of supporting roles including Courtney Eggleton & Sam Goodyer, it’s a show that is different but easy to watch that ends nicely. After living overseas for many years myself, those feelings of ‘whakapapa’ or ‘belonging’ suddenly returned watching the show. It definitely got me.