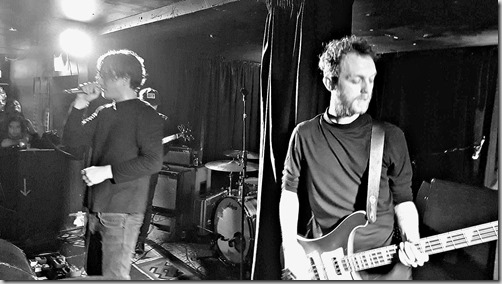 Walking down the steps of Auckland’s Whammy Bar, I was a little apprehensive as I came face-to-face with the heaving, near-capacity, crowd eagerly awaiting the arrival of Auckland-based ‘hypno-rockers’ Racing, who have been hitting the road in support of their new release Misbehaving throughout May.

Nagging at me while I waited, drink in hand, for the band to arrive thinking how I had let one of New Zealand’s best live bands slip under my radar for so long.

Racing’s front man Ed Knowles once commented that you can’t put a price on “momentum and energy”, and rising out of the ashes of the break-up of The Checks, the band seems to have taken these words to heart – their ferocious live performances, and critically-acclaimed first EP have earnt them rave reviews and placed them at the vanguard of New Zealand’s rock-n-roll revival movement.

Comprised of Edward Knowles (vocals), Sven Pettersen (guitar), Izaak Houston (drums) and Daniel Barrett (bass), Racing’s sound is as captivating as it is hard to pin down.

The band wears its many influences subtly, crafting tracks which combine the best of hard rock and psychedelia, while still being wholly original.

Crowd favourite, Stereo Fields, showcased the bands hypnotic and mesmerizing sound which draws as much from Tame Impala and it does from 90’s Brit-rock, while All Night Long, a frenetically-paced and surging rock-anthem, is the sort of track that Aussie rockers Jet wished they could have written.

Ex-Checks vocalist Ed Knowles, was at the top of his game on Friday night, absolutely owning the stage and whipping the crowd into a near fever-pitch frenzy. The gig also served to showcase his impressive range, which saw him veer from Josh Homme-like tuneful heaviness on Sex in Summer, to a delicious falsetto on the nights stand-out track, Misbehaving, a catchy-as-hell disco-ripper that also serves as the bands new single.

For their parts, guitarist Sven Pettersen was sensational, ripping through blues riffs with ease, while bassist Daniel Barret, and drummer Izaak Houston, paired to form a searing rhythm section which imbued each track with a pulsating sense of urgency that had me hooked from the get-go.

I went into Friday night’s performance with little knowledge of what was going to unfold, but I left Whammy happy in the knowledge that if Racing is the future of rock in New Zealand, then we’re in very good hands.

You can next catch Racing on Friday the 27th of May at Darkroom in Christchurch.