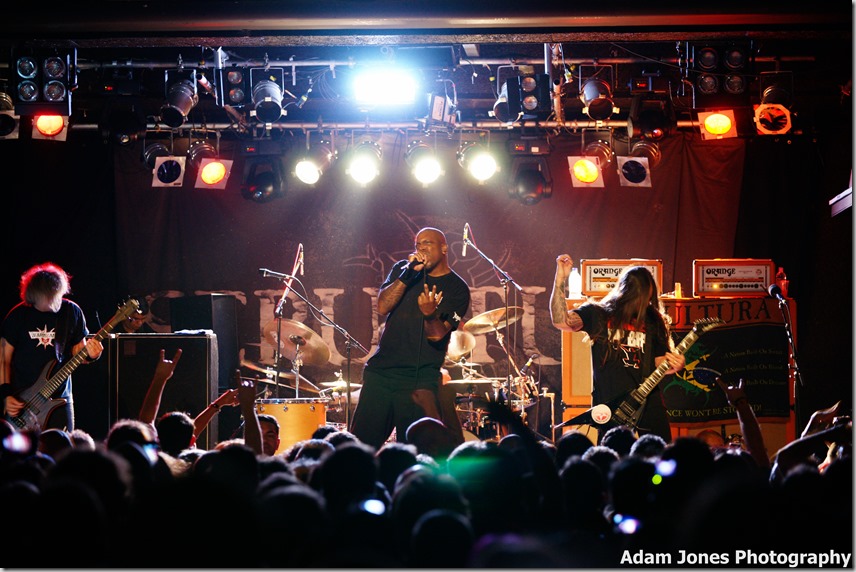 One last spray of CK one to ward off any unwelcome evil stenches as I approach at the Sepultura gig at Auckland’s Studio on Karangahape Rd. It’s an all too familiar sight, Bogan heaven. It’s where the tribally tattooed meet in default black clothing, by the show of tee shirts it was obvious that everyone had come to see Brazil’s favourite sons of metal.

It was the city of Belo Horizonte, Brazil in 1984 that launched the ascent of their native sons in Sepultura (Portuguese for “grave”) by teen brothers Max and Igor Cavalera, the Death/Thrash Metal band have become the country’s biggest heavy metal act and the burgeoning Auckland crowd was testament that you can’t keep a good band down.

Local acts Bulletbelt and Tainted fittingly warmed the crowd, it was ensuring knowing Kiwi metal is in safe hands, however after much flittering onstage by the group’s techies, the band finally took centre stage led by Ohio native vocalist Derrick Green, the crowd awoke as they whipped the stage into a frenzy. It was obvious that the crowd were all too accommodating exerting their pent up energy only to be encouraged by Green who was totally in control giving his signature “bounce” hand signals, which only incited the crowd further.

Sepultura were on fire last night, ripping through their more than generous set spanning their thirteen albums or so, they were a force to be reckoned akin to trading body blows from boxer Joseph Parker, brutal in song and relentless in execution they showed they still have the goods. Songs like Territory, Propaganda and Orgasmatron were eagerly devoured, with guitarist Andreas Kisser pausing after one of the songs to let loose with a “Kiaora” as he introduced the next song off their latest album “The Mediator Between Head and Hands Must Be the Heart” “Manipulation of Tragedy” the drumming by Eloy Casagrande on that tune was worth the price of admission alone.

Refuse/Resist, Arise and Roots Bloody Roots displayed the sheer talent of these guys, that old school thrash metal guitar and punk sensibility ignited something inside this old rocker, it was a freight train unleashed that had me smiling and moving to the bands every whim. Of course it wouldn’t be fitting if there was nothing said about our city, clichés aside Green had also had Te Reo lessons and commented how much they had enjoyed their stay and the country

30 years of existence have seen Sepultura change their personnel line up but their music relatively remains unscathed – Even without the Cavalera brothers I’m sure most purists would’ve been satisfied, let’s hope it’s not another 20 years before they return to our fair shores