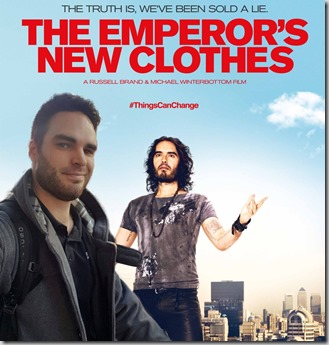 The Emperor’s New Clothes (which starts off with the age old tale of the same name) is a political documentary presented by the eccentric comedian Russell Brand on the ever expanding wage Gap between the wealthy and the rest of us.

Comedian Russell Brand and filmmaker Michael Winterbottom (The Trip, 24 Hour Party People) collaborated with this documentary, tackling inequality and the growing gap between the rich and the poor. In a way only Russell Brand can, he challenges us to not only question why this is happening but to protest it and rally change. Much of this involves corporate tax evasion and unethical (but still very legal) business practices by some of the biggest and wealthiest companies which we are all too familiar with.

While I’d class it as a ‘doco’, it’s one of the best with Russell acting as a sort of “man out on the street” style journalist who goes around pestering bankers and CEOs of the companies in question about their behaviour and why they think they can get away with it.

Great entertainment if you’re a fan of Brand’s rhetorical humour so I’d give it a solid 3.5/5 over all.