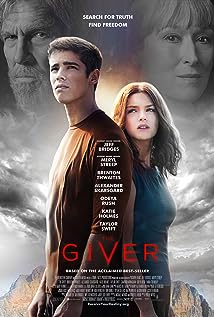 I really tried really hard not to like this movie. These new “Teenult” films do my head in (Fault In Our Stars, Hunger Games, Divergent) it’s not that they are bad or anything but I just can’t seem to stomach the pubescent clatter. The Giver will appeal to those fans of the book however I think also to people in a similar position as myself, wanting a good entertaining watch without trying too hard to analyse the plot.

Having never heard of the film or book I pleasantly welcomed the film’s “Orwellian” subtleties. A perfect society governed by rules to benefit the greater good: Use precise language, wear the assigned clothing, do not lie etc. on paper it sounds like a dream, however when Jonas (Aussie newbie Brenton Thwaites) the Receiver of Memories is trained by the Giver (Jeff Bridges) he gets a taste of lost memories love, passion, war, knowledge (nobody sees colour so as not to be racist) all the supposedly corrupt characteristics that spell doom for the community, he now realises that their society is fake and sets out to restore those “lost” emotions while fighting the powers that be, who of course try to turn his best friend Asher (Cameron Monaghan) & childhood love Fiona (Odeya Rush) against him. Later in the film he develops feelings for her and begins to see glimpses of colour on her body, which we find out is due to Jonas rejecting an emotion suppressor administered daily to the minions.

The film is by no means a cinematic masterpiece nor does it set out to be, to be honest any film that takes on a visual translation of a bestselling book is asking for trouble. However quibbles aside I found The Giver to be light hearted enough to be entertaining with some decent acting to subside the boredom within.

Meryl Streep as the icy Chief Elder & Jeff Bridges as the doting but mentoring Giver add experience and provenance to a richly endowed cast, of course one cannot forget country artist Taylor Swift whose 15 minutes of fame as Rosemary is rather a forgettable affair. This is probably the closest I’ll come to handing out accolades for a teen flick, but unlike the others The Giver can rest assured that its mission accomplished