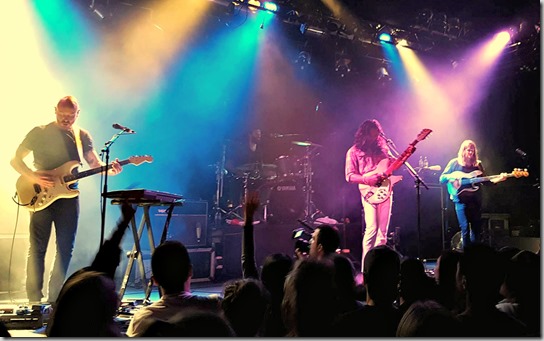 Anyone who knows the Temper Trap song Sweet Disposition, will testify it’s the modern rock anthem for our times. Vocalist Doug Mandagi’s wispy falsetto is unique in rock, his vocals a perfect juxtaposition to the driving pop indie guitar sound generating from this talented Australian Band., Bur, Love Lost. The crowd gravitated towards singer Doug, his charisma quite Hutchence-esque under the muted lighting as Greer let rip with the familiar guitar chords of their 2008 smash hit song Sweet Disposition.

Songs from the new album Thick As Thieves were tested on the eager Auckland crowd, the title track Thick As Thieves, So Much Sky and the extremely catchy Summers Almost Gone teasing the crowd as singer Doug stood serenely composed, his long locks giving way to his occasional flirt with the maraca while drummer Toby Dundas was a jack hammer behind the kit, pitching in when needed on backing vocals.

Local Dunedin boy done good, guitarist Joseph Greer was singled out as the crowd acknowledged one of their own as Mandagi remarked to his parents in the audience “Thanks for raising a fine young man, you guys did a great job”.

The Kiwi ‘love’ didn’t stop there either as the boys fired out a delicious funk twist on kiwi band Unknown Mortal Orchestra’s Multi–Love in the finale, the treatment sounding every bit as delicious as the original, it was an intimate connection with the crowd.

The group are about to embark on an arduous world tour in support of the new album taking in Great Britain, North America & even Indonesia so tonights IHeartRadio gig was the perfect launch pad, a precursor to the band’s new album that’s already been earmarked by fans as a classic.

The band quickly fired out a mix of old and new tunes including Trembling Hands, Lost

Animated bassist Jon Aherne’s heavy-as-stink distorted bass on new track Alive was matched in intensity by his kiwi counterpart on guitar, the two in sync on the instrumental The Drum Song while a drum stick wielding Mandagi had the crowd clapping in unison as he danced intermittingly across the stage.

Of course, the obligatory encore was expected and the crowd made sure of that, the band came onstage again appreciative of the crowd while the band encouraged fans “to come to the merch table, come and say “Kiaora” closing the night with a few choice songs including their latest single radio darling Fall Together.

Temper Trap are the perfect dichotomy between pop and rock, their music nicely tipped with its indie leanings. The band have an honesty that is hardly attained lyrically by most artists, while their new album Thick As Thieves will be an overdue welcome by music fans eager to greet it with arms wide open.