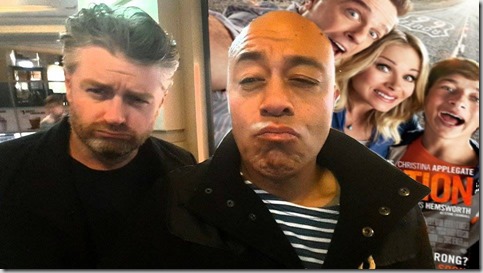 The Griswald Family is back and once again on a cross country car road trip to Wally World Amusement Park. The son ‘Rusty’ from the original 1983 National Lampoon VACATION, is all grown up with his own messed up family, needing a journey of bonding. What could go wrong? The storyline is sweet at heart, though the portrayal in this rehash misses the mark of the originals charm and wit.

National Lampoons VACATION (2015) should probably stayed as a distant memory, and stayed as the Nostalgic classic, that was once a popular funny movie in1983 starring Chevy Chase. The new VACATION, drives the same formulaic storyline cross country car road trip, sign posting with its crass, disgusting, politically incorrect, delinquent low brow comedy, even with dick jokes after dick jokes. There are laughs to be had, if be infrequent, but more than often there are uncomfortable moments of silence as you not sure what your reaction is meant to be. Surprising moments that have rather violent and disturbing outcomes, that are punching you for laughs.

The scenes with Chevy Chase, is sadly flat, humour feels mis-timed, his comedic flair feels it belongs to a nostalgic place in time. He just comes across as odd, not the iconic character he created in the original. National Lampoons VACATION 2015, is not all that bad a comedy film, it just doesn’t float above its own effluent sewage. Enjoy with risk.